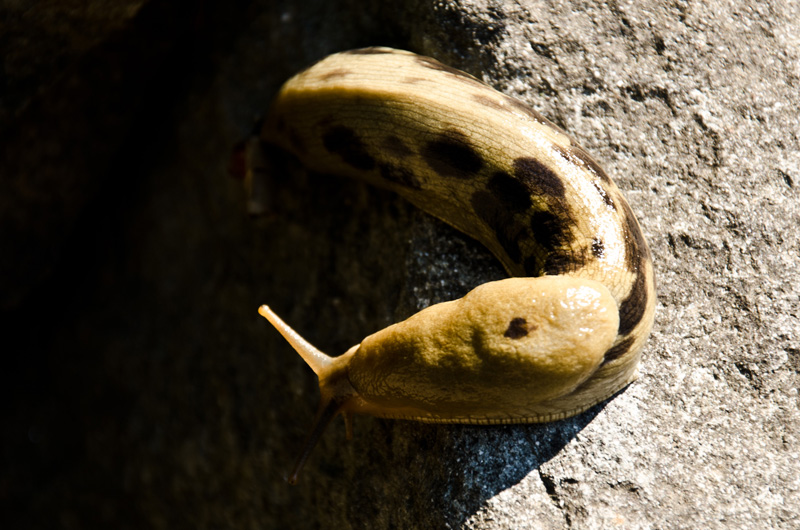 The heat has slowed these guys down some.  As well as it being warm enough for the garter snakes to be comfortable and out and about snacking on them.  Hand picking is the best remedy but if you have an area which is totally out of control, a product called Safers Slug Bait can be used.

We have had quite a run of aphids.  The simplest remedy is vigilance.  Hand picking and then rinsing affected plants.  Water seems to knock them off the tender shoots and they are unable to return.  Another remedy that works is to plant sacrificial plants that attract the aphids such as dill in the veggie garden or plants that repel aphids such as onions and garlic.  I have known those who planted garlic among the roses to keep the little devils away.  We planted garlic in our roses one year and certainly wished I had done it this year as this was the worst year for aphids in my memory.  A super out of control invasion can be controlled with Safers End-All.

Again the worst year for earwigs that I remember.  Probably too mild a winter.  There are some remedies but I have had limited success so would like to hear from some of you who have had success.  Often the damage is slight but at the Nursery at least they can cause a lot of damage when they invade lily buds as an example.

That brings me to the dear Deer.

Again this year they have taken to coming in the front gate without worrying about those of us who are around.  Last year it was a young buck, this year it is a doe with baby.  Our front gate is closed but do not be dissuaded, we are open and happy to see you.  At least if you do not have 4 legs and eat my apple trees and roses.  I was very surprised to notice that she reached over the rose bushes to eat all the leaves on the apple tree she could reach.  There was some snacking done on the roses but it was obvious her preference was the apple tree.

And in the pestilence department we have powdery mildew.  Again rinsing with water seems to be an acceptable remedy.  You can also spray with a mild solution of baking soda and water.   A serious case might call for Safers Defender.